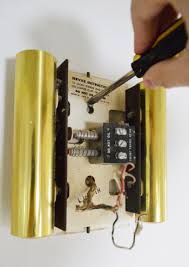 I recently purchased a wireless doorbell from Wallyworld.  I should have been more careful about picking one out.  I bought the 2nd cheapest one available,
I could’ve swore I bought one that had the speaker that plugs into a standard wall outlet and the doorbell buttons were wireless.  Apparently, I did not.  I have one that runs on batteries.
I got it all loaded with batteries and was met with a moderately OK doorbell volume.  I figured it was good enough, but was frustrated it wasn’t louder.
When I went to mount it, I started to remove the old doorbell, when I realized it was actually an alarm speaker that was wired to the home security system that came with the house.
Then I had a eureka moment. I removed the small speaker from the wireless doorbell, ran speaker wire out the front of it, and spliced it into the speaker that was already mounted to the wall.  I was able to hide the wireless doorbell box behind the wall where the original speaker was mounted.
So I now have a damn loud wireless doorbell for the price of a good sized meal at Wendy’s 🙂
It does still run off batteries, but when I have some extra time, I may see if the home security system will power it.
If I get really motivated, I may wire the doorbell into the surround sound system.  That way my nosey neighbors will be able to hear when someone rings the doorbell haha.

Art of the Steal

Catch Me If You Can